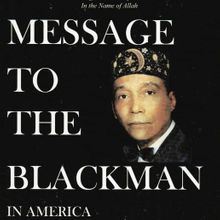 Message to The Blackman
by admin
No comment(s)

Message to the Blackman in America

The Most Honorable Elijah Muhammad

God is in person, and stop looking for a dead Jesus for help, but pray to Him whom Jesus prophesied would come after Him. He who is alive and not a spook. Do you hate me because I represent Allah, the Living God, your Lord and my Lord? Can you, who believe in a mystery God (unknown), trust your Mystery to bring you bread or to defend you against your open enemies? If so, on what occasion did He help you?