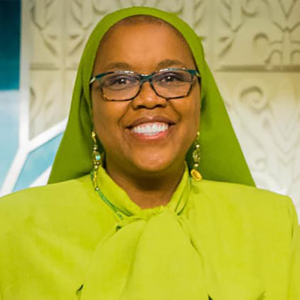 Sister Maalikah Muhammad serves as the Student Regional Sister Captain of the Southwest Region of the Nation of Islam. Headquartered in Houston, Texas. She assists with the MGT & GCC duties and activities within all the states that make up the Southwest Region which consist of Texas, Louisiana, Arkansas, Oklahoma, and New Mexico. He strives to be a great helper to The Honorable Minister Louis Farrakhan and the Nation of Islam.

In order to work in service to sisters, there must be extraordinary love present. The Honorable Minister Louis Farrakhan teaches us that love is duty and that is something Southwest Student Regional Captain Maalikah Muhammad genuinely believes. Love anticipates need and as a leader you must always lead with love in everything you do.

Her 30 years of service are a demonstration of that love. Sis. Maalikah Muhammad, formerly Valerie Muhammad, was born in Clarksdale, Mississippi, the youngest of 11, and was reared by a phenomenal mother who made each of the siblings feel that they were her favorite. Extremely intelligent, she graduated from high school at the top of her class. She entered Jackson State University in Jackson, MS, with an academic scholarship where she graduated with a Bachelor of Science degree in computer science with a minor in mathematics.

As a member of the National Honor Society and many other clubs and organizations, she also played tennis on her high school and college teams. She later received an MBA from Texas Southern University. As her high school class president and associate chief justice in college, she has always had a passion for wanting to be a part of a change in her community and a love for Black people, so it was no surprise that after attending a mosque meeting in Houston with her older sister, Sis. Maalikah found the answer to her prayers.

Fast forward to 2019 and Sis. Maalikah was doubly blessed to receive her holy first name “Maalikah” which means “master of the law of requital.” Also, in 1990, Sis. Maalikah was appointed as the interim local Student Captain of the MGT for “ninety days” that turned into thirty years. She would later become the Southwest Regional Student MGT Captain as Houston became the Regional Headquarters.

It was during that time that Sis. Maalikah met and in 1991 married her husband of nearly thirty years, Jefferrey Muhammad. The two are the proud parents of 18-year-old, Kameelah Muhammad. Nineteen Ninety was a spiritually important year for Sis. Maalikah.